Cant decide what instrument to play? Read This

I am told many times “We know we want to play in orchestra but cant decide what instrument” Or “I want to play Violin or Viola” Ill explain the the benefits and different styles of music for each instrument. Every instrument discussed come in many different sizes to match the player. 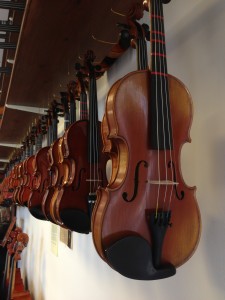 The Violin is the most popular and also one of the hardest instruments to play…It is also one of the most versatile instruments you can play virtually anything from classical to rock from country fiddle to irish fiddle. A lot of violin players start at a very young age some even from 2 1/2 years old! That is the reason why the is so much competition, that’s not to say if you start at age 8 or older you cant become a accomplished player or even a professional player it takes practice and dedication. They violin is a higher pitched sound, it can sing in joy or can cry in sorrow depending on the song, it is truly a remarkable instrument, playing modern pop songs or playing music that is 200 or 300 years old the violin shines. it is a instrument with allot of myth and folklore built around it and its players but i wont get into that in this discussion. The violin brings a life time of joy to many people who have learned it, if you put the time in to learn it well even if your not a professional player it is something you can play your whole life and enjoy and take pride in it. Though one of the hardest instruments to truly master dose not  mean it cant be played by all people with differing skills, it is a very suitable instrument for beginners and age should not deter you in any way, your never to old to learn to play the violin or any instrument for that matter. Albert Einstein used to say when he could not figure out a problem he would play his violin and it would calm his mind and then he could think much easier with the peace it brought to his mind.

The Viola is the same shape as the violin just in a bigger package, it has a lower pitch and a very warm sound. Many people will start on the violin then switch to the viola because the viola has less competition and is easier to play, (If you Can Play the Violin you Can Play the Viola) it is a easy transition.The viola is usually kinda a background instrument it dose not get as much respect as the violin or the cello…That said it dose not get enough respect for it is a very beautiful instrument, great for baroque music or classical you can play virtually anything the violin can but there is not allot of music written for different styles like country fiddle or Irish fiddle..its a much deeper sounding instrument then the violin and most of the country or Irish music is played wanting that higher pitch. The viola’s is a bridge between the violin and the cello when you have a violin and cello together it just dose not sound right until you bring in a viola. Many people find they progress better ion viola then they did they violin because it is not as demanding and not as much competition and as they progress they begin to love the instrument, it is truly a beautiful and very capable instrument for groups or even for just a single person playing. Playing a Love song or a Elegy (Funeral Song or Mournful lament) or even playing some Modern pop music it is a great standout instrument and will bring joy to any who take it upon themselves to learn it. it is a kinda awkward position compared to the Cello. 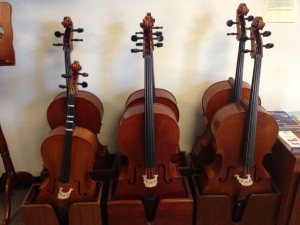 The cello is a little more popular then the viola and because it is a more natural position (Sitting Down with Back Straight) it is also easier to learn. the cello can be played with every kind of music, Romance, Classical, Jazz, Country, Rock, Modern and Old, slow and fast, sad or exuberant. Though it is “easier” to learn it dose take alot of skill and hard work (As Every Instrument Dose) to truly master it, but with patients and perseverance you can truly make this instrument sing. Since it is a more natural position when playing and a much deeper tone then the violin it is appealing to  many people who like the deeper sound but not so deep as the double bass. Some of the most beautiful songs are written for the cello, and there is more competition then the viola with the cello. It is a great instrument for young and old male or female classical music lover or modern music enthusiast, the cello brings such beauty and warmth to any music it play’s it also brings such heart felt truth when a elegy is played on it. the cello will bring anyone who play’s a lifetime of enjoyment even if only played once a week it still brings peace and joy to the trouble mind playing a cello and feeling the vibrations through your chest  and whole body is something truly an amazing feeling.

Many people who find to much competition with the cello with switch to the bass, it has the least amount of competition and is the least popular out of the four instrument discussed here, It is a challenging instrument in its own right, played commonly with both the bow and also full songs with just plucking the strings, it is a instrument played standing or sitting on a stool, because of its size it intimidates allot of people, but to those who look past that and actually start to play it, it truly becomes a great and versatile instrument, no jazz band is complete without a double bass player, and no orchestra is complete without it’s bass player either, the deepest or lowest pitched of the four instruments discussed. despite its deep tone it can play many styles and play sad and joyful songs as well. It is the leased popular not because it is easy but because it is so large and hard to move around, so because of that bass player’s are in short supply in middle schools and orchestra’s. many player’s decide they like jazz over classical and the bass is truly a capable instrument in both and styles, and many more styles. It will bring many year’s of enjoyment and be a lifetime companion to many to take it up.